How to Drill Holes where You Want Them

Back to Mechanical Tutorials Home

Next Tutorial: Keeping Bolt Holes Aligned when Drilling and Tapping

Usually when you drill holes as part of robot construction, it matters where they are, and this is often a significant challenge, even when you are using a drill press. Besides just taking the time to measure and mark accurately, the most common issue that makes it difficult is "walking" of the drill as the initial cut starts. This is just because the drill is turning, and the tip is not a single point. Even on the drill press, smaller drills flex, and a hole can start off center. To start, let us look at the tip of a typical twist drill. Note the yellow highlighted labels for the chisel edge and its corners. 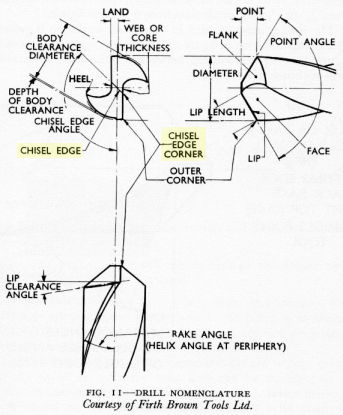 Of course, these techniques apply to drilling without the use of precision machine tools. Drilling with CNC machine tools, and even a conventional milling machine, with the appropriate machine drills is generally done in a single pass, relying on the rigidity of the machine and a short drill bit to keep things centered.

The chisel edge runs across the end of the drill's web, and is the first part that contacts the work. If you put this chisel edge against a piece of metal and turn it, then it will want to walk along the surface, pivoting on the chisel edge corners. If the drill is held rigidly in place, the chisel edge will scrape away a circle of material as the beginning of the drilling process, and as it goes deeper, the cutting edges start cutting a flat bottomed cone-shaped depression that matches the shape of the drill point. This depression keeps the drill on center for the rest of the drilling operation, by pushing the drill toward the center. But even then, if the tip of the drill is not perfectly symmetric, or if the drill is not perpendicular to the surface, or if the material has uneven hardness, it can cut more on one side than another and drift until the entire point is below the surface. There are drills that are ground to have a smaller chisel point, to do this, other compromises need to be made that makes the drill less desirable for the kind of materials we use, specifically aluminum.

Smaller drills will walk even when they are held rigidly in the drill press. This is because they are flexible, and have very little side to side rigidity. If they were not flexible, then they would break under side pressure, so this flexibility is not all bad. There are also ways in which we can take advantage of the tendency of a drill to flex, as described below.

To help with problems of flexing drills, using a short drill, also called a screw machine drill or a stub drill, is a good solution when drilling without a pilot hole. A shorter drill is more rigid just because it is short.

The most common approach to keeping a drill from walking is to use a center punch to create an initial starting cone. If this cone is significantly bigger than the chisel point of the drill, then we have centering forces from the beginning, but as soon as the center punched part is cut away, the drill can still drift because of uneven cutting. The best situation is if the punched cone is bigger than the entire diameter of the drill, which is clearly not going to happen with even moderately large drills. The flexing of a small drill is actually an advantage for starting a hole if it fully fits in the punched cone, because the drill will follow the cone even if the drilling machine is not on center.

How to accurately punch on scribed lines

Once the location of a hole has been marked by scribing, you will typically have two straight scratches at right angles on the work piece. A very sharp punch will be able to follow one of the scratches up to the point where it intersects the other. To make this easier, you can use a prick punch to find this location, punch at that location, then follow up with a center punch. A prick punch has a much narrower cone shape, and does not make a good cone for drilling, but following it with a center punch widens the cone for drilling either with the final drill, a spotting drill, or a pilot drill (below).

Another way to form an initial guide for the drill tip is with a spotting drill or center drill. A center drill is a rigid drill with a small spur point that allows you to make a small hole without the drill flexing away from where you want the hole. Though center drills are really designed to drill holes for lathe centers, they work fine for this purpose. A spotting drill is also a rigid short drill with cutting edges just on the end, but not the narrowed spur characteristic of a center drill. Spotting drills are specifically designed to help get a drill started in the right place. 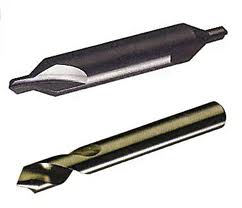 The key advantage of spot drilling over center punching is that it can usually be done more accurately when used on scribed layout. A center drill or spotting drill is normally used in the drill press as the first (pilot) step of a sequence of drilling steps. The center drill should go deep enough to form a small cone outside of the diameter of the spur. There are multiple techniques for using a spotting drill, and lots of discussion on the web about it. For small drills in soft materials like aluminum, many people like to make the centering cone just a little wider than the final drill size, resulting in a nice beveled edge on the finished hole. This depends on the drill centering on the outside edges of the drill, though, which can be tough on a drill when drilling in a hard material. The other common approach is to make the centering cone just wider than the web of the drill.

For small holes, where center punching or drilling creates a big enough starting cone, it is fine to just drill the final hole in one step. For larger holes, whether this is adequate depends on the rigidity and accuracy of the drilling setup. For drilling with a hand held machine, or in some situations on the drill press, it is useful to drill a smaller pilot hole to guide the larger drill through the work. Referring to diagram above, the diameter of the pilot hole should be about the same as the thickness of the web of the final drill. This eliminates walking because the chisel point is confined in the pilot hole, and never touches the work. If the pilot hole is too big, though, centering depends on the balance of the cutting edges on either side of the drill, which often causes the drill to vibrate (chatter) from side in the pilot hole, which results in a hole bigger than the drill, and not quite round.

There are times when a too large pilot hole is unavoidable, such as when you are drilling out a tap sized hole to body size, or otherwise slightly increasing the size of a hole. In this case, the pilot hole is only about 20% smaller than the final hole, and chattering can easily happen. This chattering happens because when the end of the drill is not actively engaged in cutting, the only centering force on the drill is friction against the sides of the hole. A drill in a hole makes a lousy bearing, because the same centering force also causes the lands of the drill to enlarge the hole. The good news is that not much material is being cut when the drill is fed into the hole, so it can be fed much faster, which restores the centering force of the drill pressing against the cone-shaped bottom of the hole. If the drill still chatters, check to see if the drill is ground symmetrically, and if not, then don't use it.

When you need to drill a big hole, say 3/4 inch or one inch, with a regular drill press, you can use a large drill with a shaft turned down to fit a normal sized chuck. These drill bits are commonly called Silver and Deming bits.

Though having these drills can be convenient, it is important to keep in mind that most drill presses are not rigid enough to keep a drill this large centered while drilling, so the drill tends to wander around the correct center and the hole does not end up being very round. When drilling in a softer metal like aluminum, this is one of the few cases where it is often preferable to make a large pilot hole, about 1/2 inch, and run the large drill at low RPM with pretty strong feed force to avoid chattering. Since the large drill is now cutting only along the surface of the pilot hole, it experiences strong centering forces, increasing your chances of getting a round final hole. Clamping the work strongly is critical in this situation. Of course, a large industrial drill press or milling machine would be rigid enough to drill holes this size without playing tricks like this, and would have the tool holding capacity to not require the turned down shank.

Only one pass, and do not linger

Spinning a drill in hole it has already been drilled is generally not a good thing. As mentioned above, a drill turning in a hole is not a good bearing, and any sideways force makes the hole bigger. Just spinning in the hole causes the drill to vibrate (flex from side to side, or walk around the inside of the hole) which creates that sideways force. When you finish drilling a hole, either stop the machine or let the spindle (of the drill press) quickly pull the drill out of the hole. Do not run the drill back into the hole "to make sure it is finished"; if the drill passed through the material and came back out, then you are done. The best drilled hole has only met the drill once. This is doubly important if you are drilling with a hand held machine. The second pass will almost certainly enlarge the hole because you can't hold it exactly collinear with the original hole.

Drilling with a milling machine

All of the above techniques assume somewhat ad hoc positioning and clamping approaches. Drilling on a milling machine or even a hybrid "drill-mill," both having precision indexing tables for positioning, changes the constraints. On this type of machine, the work is clamped to the table, positioned correctly using the table controls, and the hole drilled in one pass with no pilots. To keep the whole system rigid, the drills used should be only as long as necessary. For this purpose, short drills designated "screw machine drills" or "stubby drills" are used, which minimizes drill flexing.

Next Tutorial: Keeping Bolt Holes Aligned when Drilling and Tapping
Retrieved from "http://edburdick.net/mw/index.php?title=How_to_Drill_Holes_where_You_Want_Them&oldid=712"